Slate is a fine-grained metamorphic rock derived mainly from mudstone and shale.

Slate is derived from fine-grained sediments such as mud or occasionally volcanic ash laid down millions of years ago in layers known as bedding. As the pile of sediments thickened, the original open structure of the mud was compacted into a mudstone or shale.

These rocks are easily split on the bedding planes and are referred to as flagstones. However, for a slate to form, subsequent intense geological forces associated with mountain building are required, during which the minerals present in the original mudstone are metamorphosed.

Some minerals, such as quartz grains, are flattened and stretched, while clay minerals are recrystallised as platy minerals: white mica and chlorite. The quartz minerals give the slate strength and durability, while the platy minerals form cleavage planes, which do not correspond to the bedding planes, but which allow the rock to be split into much thinner slabs suitable as roofing material. Differences in the composition of the original mudstone and the degree of metamorphism affect the quality of the slates thus produced. 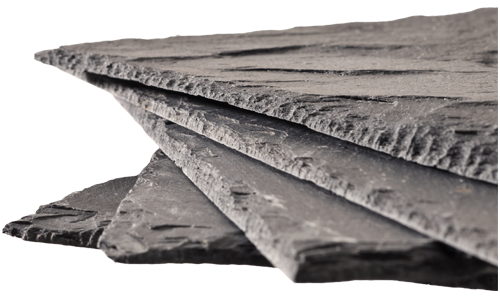 The geology of slate

Slate has a long tradition as a construction material. Slate is a natural, aesthetically pleasing stone. Its strength and outstanding resilience make it one of the most durable and versatile roofing materials. The beauty of slate lies in the fact that it is a natural resource that requires little alteration from its natural form and offers a long lasting, pollutant resistant, fireproof, waterproof material with a warmth and elegance which places it in a league of its own.

Slate is mainly used for:

What is the age of slate?

History of natural slate in Scotland

Slate has been used as a roofing material throughout scotland since The middle ages. Quarries were located in several areas, of which the Most important were:

Some of the earliest references are to Easdale, from which slate was sent to St Andrews in 1197, and to Glasgow to roof the cathedral also in the 12th century. Reliable records began in 1745 when the Earl of Breadalbane and others
established the Marble and Slate Co of Netherlorn to extract slate from Easdale Island.

As demand increased during the 18th and 19th centuries, the company expanded to neighbouring islands. Slates
were transported by sea around the north coast to all the major towns on the east coast and through the Crinan
Canal to Glasgow and other west coast centres.
Ballachulish is the best known Scottish slate, both in terms of quality and quantity.

Production began at the end of the 17th century and expanded rapidly to overtake the Slate Islands in the 1860s.
The quarries were ideally located close to Loch Leven, which enabled slates to be transported by sea around Scotland.

They are grouped together because of similarities in their geology, but have very different histories.

Proximity to the coast was initially the most important factor limiting production; for example, slates from the island of Bute were reputedly used in the 15th century and from Arran in the 18th century.

With improved communications in the 19th century, sea transport was no longer essential and inland quarries such as Aberfoyle came into their own.

The rise and fall of the Scottish slate industry mirrored that in other parts of Britain. Starting slowly, it reached its zenith around 1900, producing 25-30 million slates per annum.

However the beginning of the 20th century was marked by a depression in the building trade, compounded by a shortage of manpower during two World Wars. While the Welsh and English quarries survived, the Scottish industry could not compete with tiles and imported slate. The Ballachulish quarries closed in 1955 and the remaining quarries in the 1960s.