I am going to talk today about the world’s main roofing slate outcrops, their characteristics and their historical importance. Before I go on, I would like to give a quick reminder of the difference between slate and roofing slate.

The first is a type of rock, which is relatively common in the earth’s crust. It is defined from a geological point of view as a very fine-grained rock with a structure of metamorphic origin known as slatiness, which means it can be opened in strips of varying thickness. 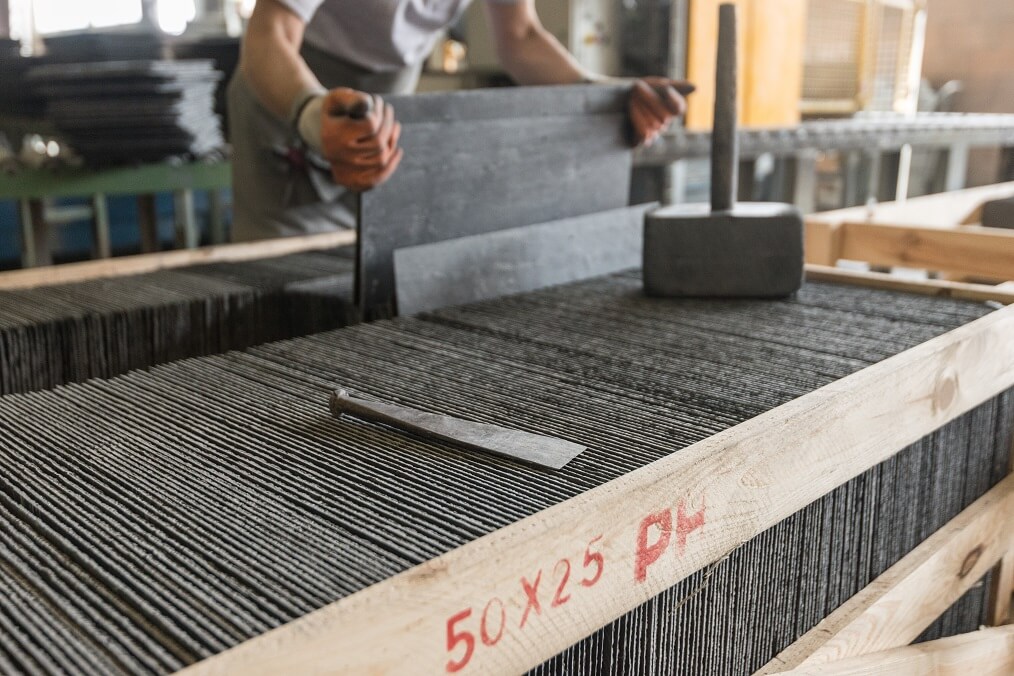 Roofing slate is a rock of metamorphic origin that can be opened in thin sheets that serve as material for roofs and tiles. Various types of rock can be found under this title: metalutites, slates in the strict sense, phyllites or mica-schists.

Not all slates are suitable for use in roofing, nor are all roofing slates strictly slates.

Now I have made that clear, let us look at how they are distributed around the world. The principal outcrops are now to be found in North-Western Spain, between the provinces of Ourense and Leon. There are different varieties but they all share a colour ranging from blue-black to grey, a texture ranging from rough (for grey slates) to smooth (for black slates), and a high exfoliation capacity, which lets us obtain thicknesses of between 3 and 8 millimetres.

This roofing slate is similar to what was historically extracted in France and Germany, countries with a long slate tradition, but where the quarries were exhausted a long time ago. Nearly 80% of the roofing slate sold worldwide comes from here. There are also two small deposits producing phyllites in Spain, of green and grey (Britonia in the province of Lugo) and grey (Bernardos in Segovia). 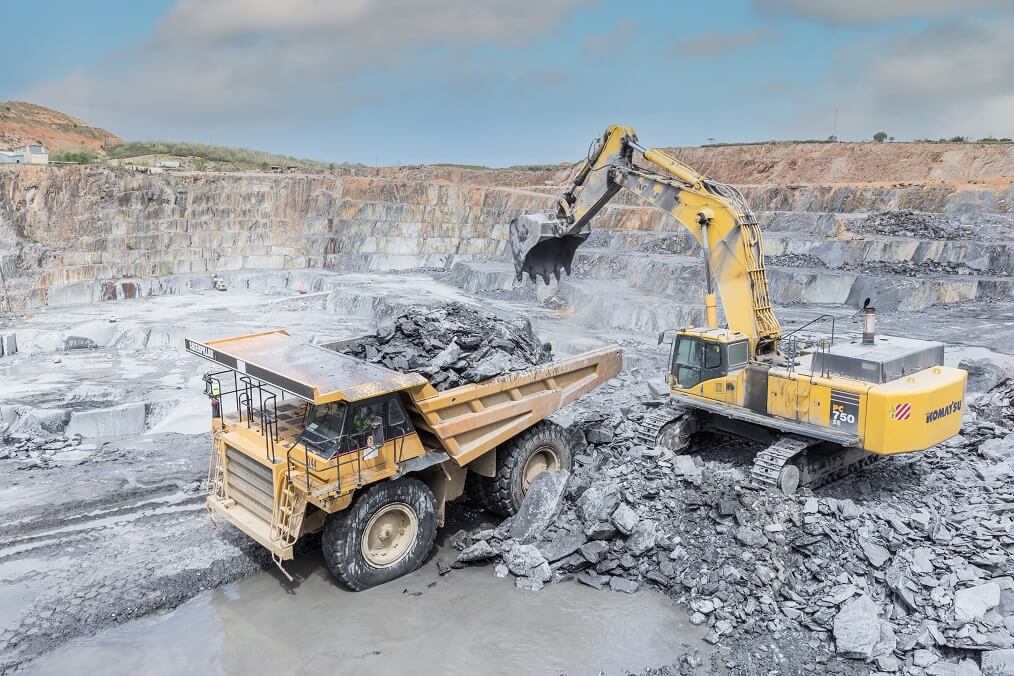 There were significant outcrops in the rest of Europe in Wales, France, Germany, Italy and the Czech Republic, but these are now depleted, with only some residual activity remaining, mainly in Wales, where slates of purple-green and grey tones are extracted.

In addition, green serpentine is very popular in northern Italy. This rock of rough texture, which exfoliates in thick sheets, is highly prized in high mountain areas on both sides of the Italian-Swiss border. In Scandinavia they extract grey and green quartzites and mica-schists; thick, rough stones.

Outside Europe, there are significant outcrops in the United States (Vermont, New York and Pennsylvania), where they extract black, purple, green and red slates. US deposits are small compared to those in Spain and they extract the slate with explosives, rather than using diamond wire, however, this reduces the deposit utilisation rate. 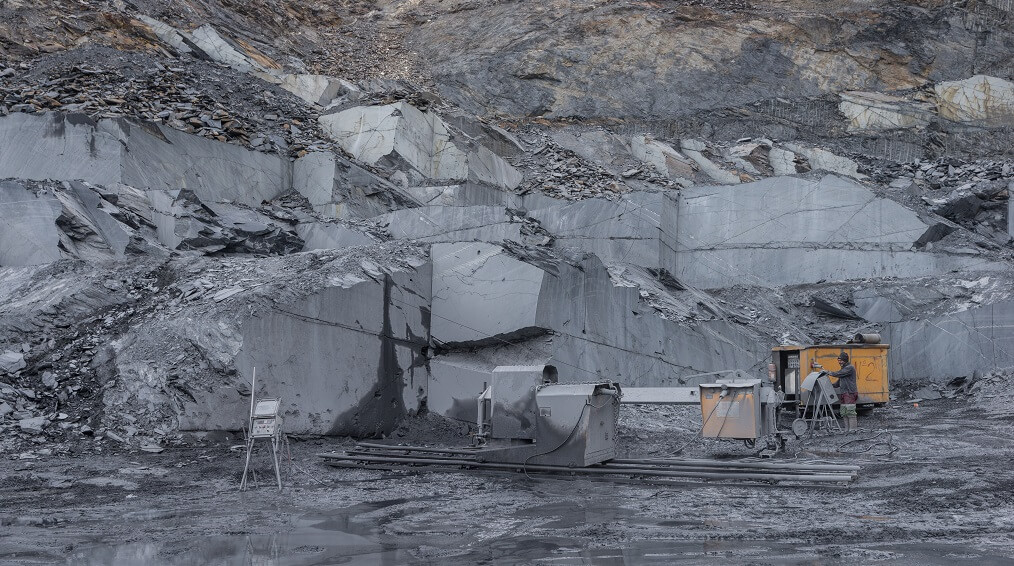 In Canada there is the Saint-Marc-du-Lac-Long deposit in Quebec, which produces a smooth black slate. This quarry does use diamond wire, and has higher production than the other quarries on the North American continent.

In South America there are the Minas Gerais deposits in Brazil. A special type of slate for roofing is produced here, as the rock itself is not a slate from the geological point of view, but a metalutite, a rock of lower of metamorphic grade than slate. It can easily be distinguished from slate. It has a matte appearance, no fibre or grain on the surface, and its cut is not as straight and clean as that of slate. It is extracted mainly in grey and green colours. In Argentina there is a green phyllite quarry similar to the ones in northern Spain.

There are two potential slate producing countries in Asia, but which have yet to get off the ground: India and China. These two countries have a great variety of rocks, so it is sometimes difficult to understand what they are actually producing. Each pallet can be a surprise. Their slate industry is also still incipient, and the manufacturing and quality control processes leave a great deal to be desired. India also has the added problem of using child labour.

The greatest volume of deposits can be seen to be concentrated in Europe, the home of the slate tradition. In the rest of the world, the outcrops were opened by European immigrants (eg. In USA, Canada, Australia) for domestic supply, or as suppliers to the European market (Brazil, China, India).

The Spanish slate roofing industry is the global leader both in product manufacturing and quality and in service. There may be countries that produce similar slate to Spain at a lower price, but always at the expense of quality. 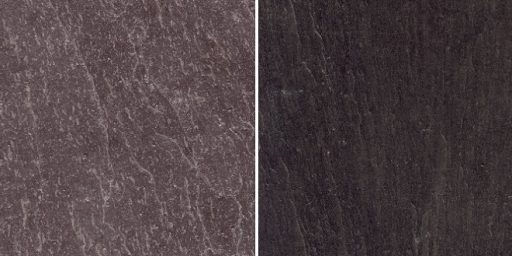