Dr. Joan Walsh
BSc in Geology from the University of Glasgow

This is an age of great concern about the environment and climate change. We are continually reading in the media of the impact of increased global temperature and changes in the world’s climate. The predicted effects are wide ranging, from higher sea levels, due in part to melting glaciers, to increased intensity and frequency of tropical storms. These impacts will lead to flooding in low lying areas and, ironically, to water shortages in others. One of the principal causes of rising global temperature is the increase in greenhouse gases in the atmosphere, in particular that of carbon dioxide; CO2. 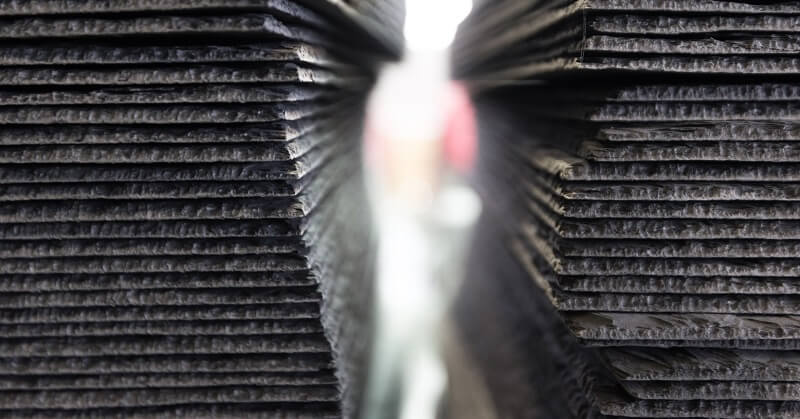 Historically the affluent countries of Europe and North America were the principal culprits in producing greenhouse gases. However, more recently the rapid economic growth in China, which is fuelled by coal, accounts for ever increasing rates of carbon emissions since the year 2000. Although the effects are global, it is the responsibility of every individual, every industry and every nation to work collectively to reduce the environmental impact of their activities.

It is not always possible to make an informed choice to determine which is the best environmental solution to a given problem. Is it better to import tomatoes from Spain, which grow without the need for artificial heating, or to select home grown produce which requires heating but minimises transport requirements?

One of the ways that the industry can help to reduce its carbon footprint is to select materials with the lowest overall contribution to emissions and environmental impact. Here again it is difficult to make informed choices. For example, aluminium, produced on a large scale by electrolysis, has a very high energy requirement and could be considered an environmentally unfriendly choice. However it is usually produced using hydroelectric power which has relatively low carbon emissions. In addition, aluminium is a very durable material and therefore on a whole life basis has a low carbon footprint. Similar factors should be taken into consideration when selecting the most environmentally friendly roofing material.

In order to select the roofing material with the lowest environmental impact it is necessary to take into account several factors: 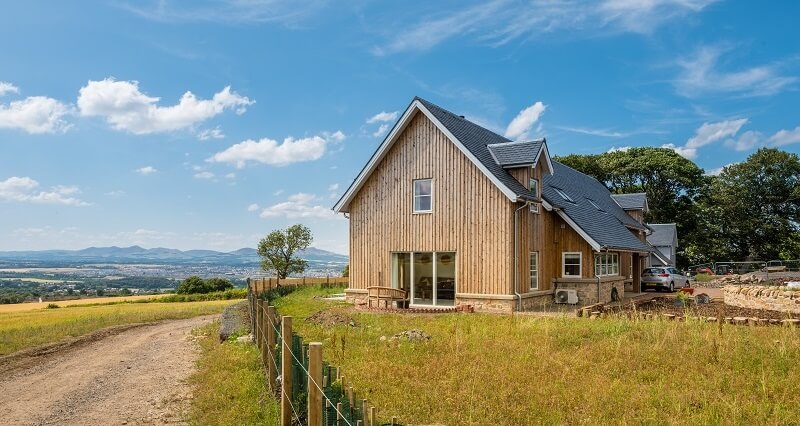 The embodied carbon was estimated from the embodied energy by using the typical fuel split for the industry and applying UK emission factors. To enable a better comparison, the embodied carbon was then calculated per square metre of roof by applying a correction factor for the differences in weight per square metre of the different materials. Copper is extracted from sulphides such as chalcopyrite (CuFeS2). The separation of copper is a multistage process which includes roasting the ore to volatilize the sulphur and impurities such as antimony and arsenic. It is not surprising that copper has a high embodied energy and produces many waste products. It is however a durable material and easily re-used.

The extraction of lead from naturally occurring ore such as galena (PbS) also requires roasting and the removal of impurities, resulting in high embodied energy. It is similar to copper in that it is a very durable material with a high potential for re-use.

Clay tiles are produced by baking clay in a kiln at temperatures between 800° and 1000°, which gives them embodied energy of 6.6 MJ/Kg.[1] Unlike copper and lead, they have a relatively low life expectancy which tends to increase the whole-life environmental impact. Concrete tiles are produced from a mixture of cement, aggregate and water. Cement is usually produced by heating limestone and clay, which leads to a very high embodied carbon value due to energy consumption of 6.1MJ/Kg.[1]

However, in addition to the carbon value due to energy, carbon dioxide is also released into the atmosphere as a by-product. As a result, cement production is a major contributor to greenhouse gases, and cement has a total embodied carbon of 0.97 Kg CO2/Kg. Roofing tiles are made from a mix of 1 part Portland cement to 4 parts aggregate, giving them an overall embodied carbon of approximately 0.2 KgCO2/Kg, the contribution of the aggregate being negligible.

Embodied energy of the most common roofing materials

It is not surprising that natural slate, which requires only minimal processing, has the lowest embodied energy of all the roofing materials (Table 1). The values for energy consumption and hence carbon emissions depend on the ease of extraction and of cutting into suitably sized units. 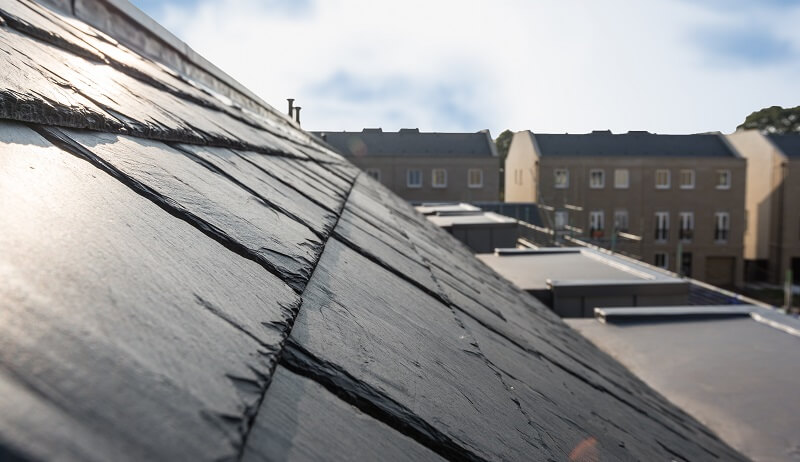 The choice of slate is also very important. Some slates are known to fail within a few years of exposure on a roof. However, good quality slates, with the potential to last over a hundred years, are one of the best environmental choices for a roofing material. For example, a poor quality slate with a life expectancy of 20 years would have an embodied energy value of approximately 5 KgCO2/metre2 over a hundred year period. Compare this with a Cupa Heavy 3 which has service life of greater than 100 years, giving it an average embodied carbon value of only 1 KgCO2/metre2 over a similar timeframe, lower than all other types of roofing materials.

Good quality slate from any source can out-perform the original building. This can be seen in conservation areas and on historic buildings in Scotland where second-hand slates are still being used for repairs and maintenance, 60 years after the Scottish industry ceased to operate. Stocks of reclaimed slates provide a ready source of locally available material. 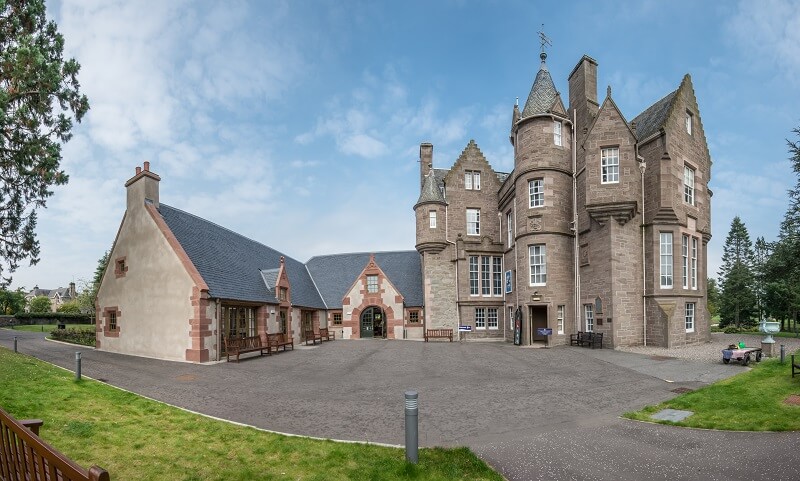 There are many factors to be considered when choosing a material for roofing a building. However, if reduced carbon emissions and environmental impact are among the most important considerations, there can be no better choice than natural slate. 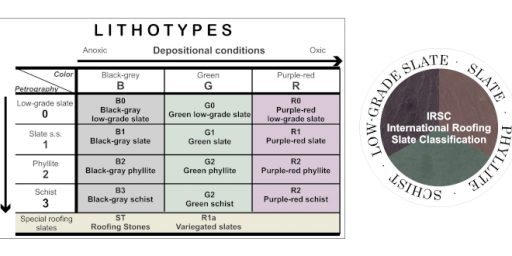 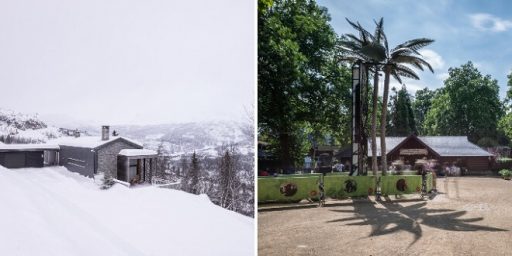 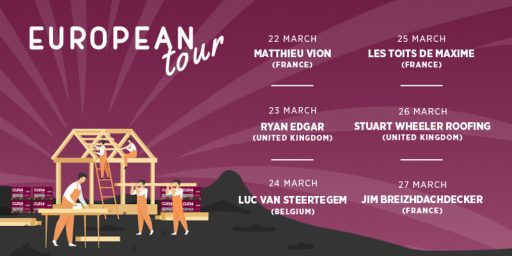 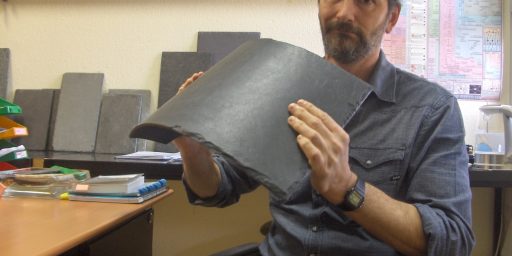 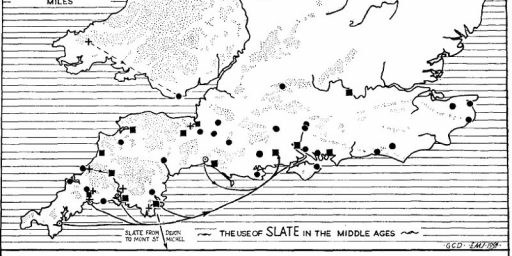